The Royal Palm was built in 1939 as a four-story resort and expanded to seven stories two years later.

The original Art Deco structure was owned by Russian immigrant developers Joe Rose and Nat Hankoff, and is one among the hundreds of hotels, apartments, and other structures erected in Miami Beach between 1923 and 1943, which now comprise the famed South Beach Art Deco District.

During World War II in February 1942, enlisted men and officer candidates began to arrive in Miami Beach for military training. Resort hotels became mess halls, bachelor officers’ quarters and crowded army barracks over the course of the following years. Ultimately, 300 hotels and apartment buildings became military facilities in service to nearly one half million US Army trainees during the war, with such notables as Clark Gable, Hank Greenberg, and Franklin Roosevelt, Jr. included in their numbers. 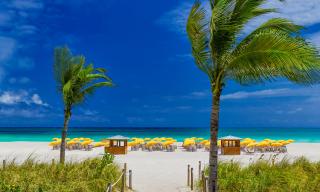 The late 1940s, 1950s and 1960s were the economic boom years America experienced after the end of World War II in 1945. These years were marked by the return home, and reincorporation into civilian life, of millions and millions of GIs. Miami Beach had its heydays during the glamorous 1950s and early 1960s [Sinatra, Elvis, Dean Martin, Sammy Davis Jr., Jackie Gleason, The Beatles were all in town]. Lincoln Road was the high-end glamorous shopping destination in Miami, including its own Saks Fifth Avenue store! (at Lincoln & Euclid)

After that fabulous period, the 1970s and 1980s saw a sharp decline in tourism as competition from newer destinations and relatively inexpensive international travel came into play. The temporary perception of Miami as a crime-infested area due to illegal drug traffic and refugee crisis also played a role in this decline. This period of time was best exemplified by the hit television series named “Miami Vice”. By the end of the 1970s and 1980s, the Royal Palm had become one more of the dozens of dilapidated and neglected Miami Beach hotels, populated largely by refugees from the Caribbean, and low-income elderly retirees.

The U.S.’s entry into World War II in December 1941 brought the sudden transformation of Miami Beach into a training and redistribution of the U.S. Army Air forces. The Royal Palm and Shorecrest hotels were among over 300 Miami Beach properties that served as military barracks, mess halls, classrooms, and other facilities for the approximately 500,000 troops that trained here during the war. In October 1945, both hotels reopened for their first post-war vacationers.

The Royal Palm and Shorecrest hotels were designed at the climax of the “Art Deco” style: including strong vertical elements and horizontal lines implying movement, and the whimsical decoration, usually of geometric or stylized motifs. The Miami Beach Architectural District was listed on the National Register of Historic Places in 1979; and ironically the same Miami Vice television show of the late 1980’s which conveyed a troubled image of Miami, also served to create an interest around the world in Miami’s pastel-colored Art Deco hotels, beautiful tropical beaches, and fast-paced Latin flavor.

In 1993, the mayor and Commission of the City of Miami Beach approved the purchase of the unrestored Royal Palm Hotel, already targeted for incorporation in the Convention Center Historic Village plan. R. Donahue Peebles and his team, including the world-renowned Miami based design firm Arquitectonica, were selected. During this time, Peebles initiated the purchase of the adjacent Shorecrest Hotel, and the City of Miami Beach partnered with him on the acquisition. The front section of the Shorecrest was restored to its original condition and is now part of this new resort complex. The Royal Palm continued under the management of the Joe Rose family until 1995. 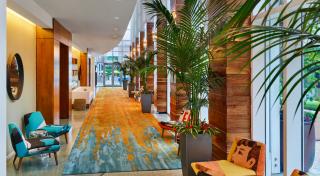 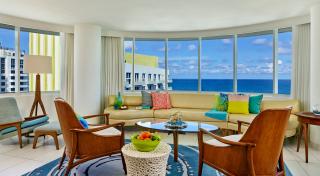 Everyone deserves a reward. Upgrade your stay in Miami Beach to one of our 139 dynamic suites, many of which feature private balconies, panoramic oceanfront views and upgraded furnishings. 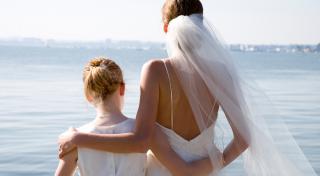 Host your South Beach wedding in our expansive Great Room and enjoy the services of our professional events and catering team. 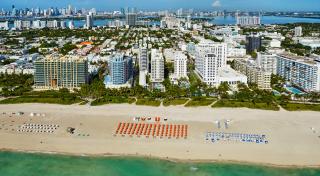 Stay in the best address in South Beach, where Ocean Drive meets Collins Avenue. Relish in beachfront access or explore the shops and restaurants of nearby Lincoln Road.

Back to Top
Reservations Panel

Enjoy our best available rates when you call or book online.